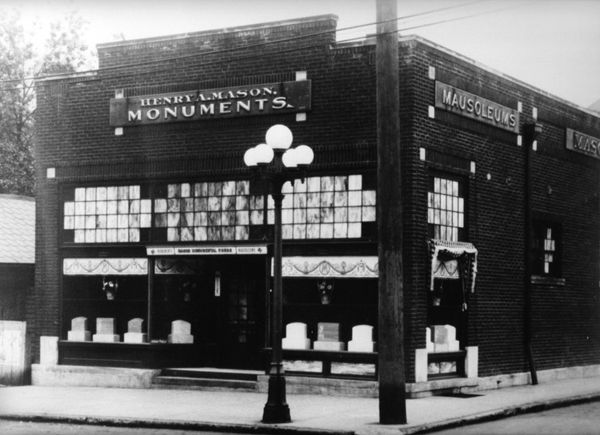 In 1877, our great-grandfather, Henry A. Mason, set up the family’s first monument business in German Village, near Columbus, Ohio. From the start, Henry approached his work differently than most monument makers. He believed that monuments should be erected – not because a man had died – but because a man had lived.

Five generations later, our branch of the family tree calls Northwest, Ohio home. As Henry Mason’s great-grandsons, we – Bill, Mike, John, and Aaron Faehnle still operate according to the same philosophy. And that’s why you can trust us to create – not simply a marker – but a tribute to a life. 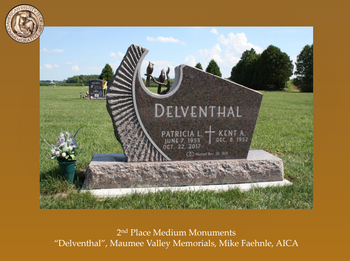 The American Institute of Commemorative Art (AICA) is an association of retail monument companies and consultants who specialize in memorials with exceptionally creative design. Located throughout the United States and Canada. AICA members are devoted to the highest standards of memorial design and business ethics in the monument industry.

Ohio Monuments is a Charter Member and proud recipient of many “Memorial Design Winners”. 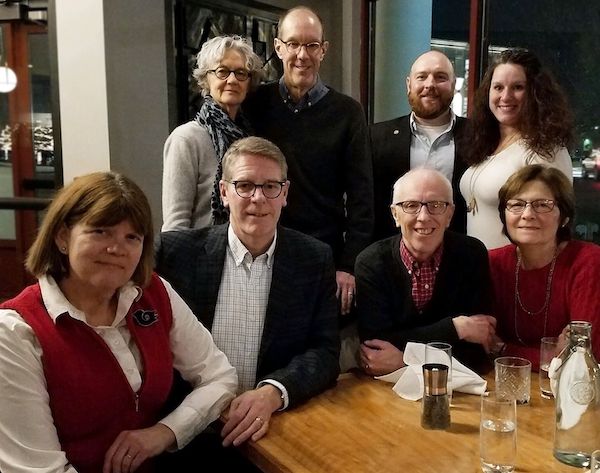 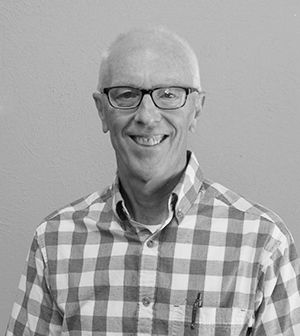 Mike has worked in the monument business for 45 years, and is a 4th generation memorialist. He's a member of the American Institute of Commemorative art (by invitation only) and Monument builders of North America. He and his wife, Connie, have 5 children together and 11 grandchildren - all wonderful blessings. They attend Cedar Creek Church and enjoy their time relaxing on their porch and motoring down the highway in their RV. Mike loves outdoor activities and playing guitar and singing on Friday nights at Sebastiano’s Italian restaurant on Heatherdowns. In no particular order, Mike is a Buckeye fan, Detroit fan, Cleveland fan, all Toledo sports fan and then some... he truly loves the opportunity to help family’s through the emotional process of selecting a monument that tells their story in stone. 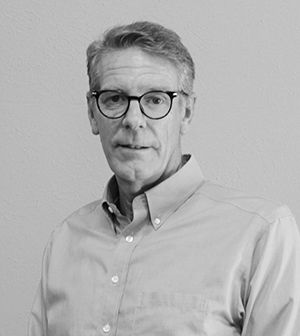 John is the 4th generation to work in the family business. He and his wife, Jane, keep busy with their 4 children and constant renovations on their home. They are members of St. Rosechurch in Perrysburg. John enjoys gardening, cooking, working out, and is a passionate Ohio State football fan. The greatest part of his job is when he helps a family create a design that tells their story and knowing it will last for generations to come. 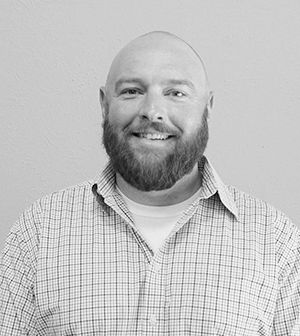 Aaron is a 5th generation memorialist in the family business. He is happily married to his wife, Robin, and they have three wonderful children: Ethan, Libbey and Eliza. When not at work, he likes to spend time with his family, hunt, fish, bicycle, boat, camp and play music. He is a Scout leader in Scouts BSA and belongs to Monument Builders of North America and the American Institute of Commemorative Art. He and his family attends Cedar Creek Church and are die hard Ohio State Buckeyes Fans. What he like most about his job is working and helping families design a tribute to their loved ones that future generations will be able to see. 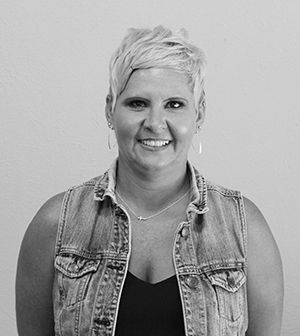 Trisha has been the office manager at Maumee Valley Memorials since 2015. She is a dedicated wife, mother of three girls, and a grandmother of one. She enjoys boating, fishing, gardening, and being with her family. Her duties with the company are mostly behind the scenes, seeing that each memorial is ordered and placed in a timely manner. Her compassion for family is the driving force that makes this happen. 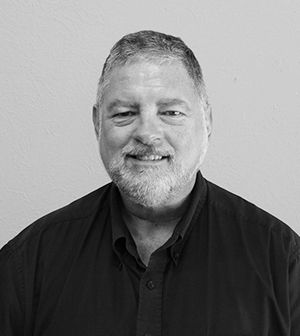 Jerry has been with Ohio Monuments for 15 years. He's a father of 3 and a grandfather of 3. He really enjoys outdoor activities and is a member of Immanuel Lutheran church of Deshler, Ohio. Jerry is an Ohio State and Cincinnati Reds fan. His favorite part of the job is assisting families in creating loving and lasting memorials for their loved ones. 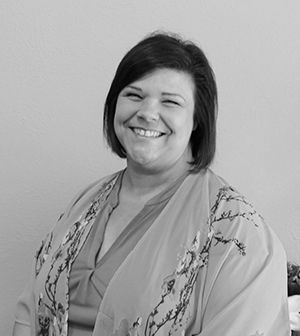 Kris was born and raised in Ayersville who's ancestors were the first to settle the area. She and her husband, John, have four children who keep them busy in many activities including band, swimming, wrestling, football, cross country and baseball. They faithfully attend and support First Church of God in Defiance. Kris love antiques of all kinds, including historic homes, and she roots for the Wolverines. She has been at Defiance Memorials for the past 6 years. Kris is also a licensed social worker, but finds it deeply rewarding as she empathizes with, listens to and captures the needs of families as they uphold the memory and bring honor to their loved ones.

Stu has spent the majority of his life living and working in the Toledo area. With his wife Susan, he has three children, two stepchildren and seven grandchildren - so there is always something to keep him busy. He enjoys distance running, golfing, following the Detroit Tigers and Chicago Bears, and he and his wife love volunteering at Cedar Creek Church. He really enjoys making his part of the memorial process easy for families. 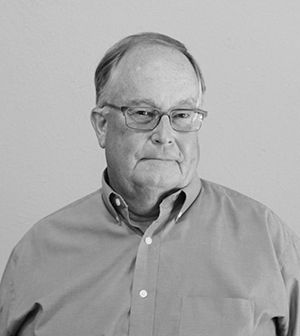 Gary has been in the funeral business since 2001, helping families with both pre-planning and aftercare. Gary finds helping people at one of the worst times of their life to be very fulfilling. As part of the aftercare, he enjoys meeting families to help design a monument to honor their family member. Gary enjoys playing golf and taking care of gardening around their home with his partner, Bonnie, along with following Bowling Green State and The Ohio State athletics. He hopes to one day see the Cleveland Browns play for a Super Bowl title. He has three sons: Bryan, Paul and Todd, along with seven grandchildren, who keep him busy. 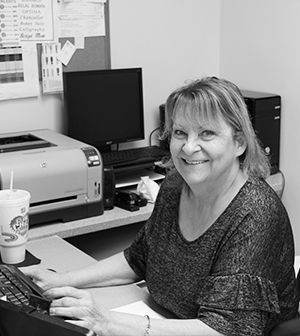 Janice has been with Ohio Monuments since 2007. She has two children, three grandchildren and two dogs, and she and her family attend Cedar Creek Church. What she likes most about her job is designing the memorial from scratch and seeing the completed end product. 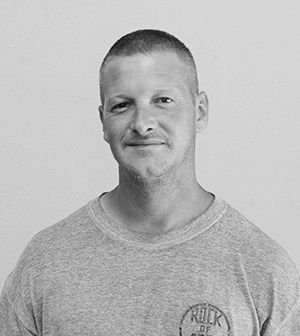 Jeff has been with the company 13 years. He has two lovely children and a dog. When not at work, you can find him playing softball, hunting, fishing, and doing all sorts of outdoor activities. Jeff is an Ohio State Fan (Go BUCKS!). What he enjoys most about his job is constructing monuments for families and the new challenges all the different shapes and sizes present. 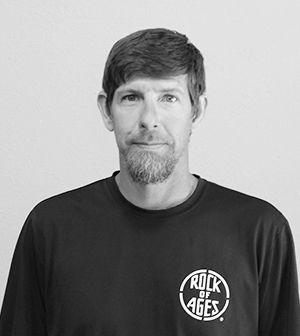 Lance has been with the Ohio Monuments for nine years. He and his wife, Karen, have three children, and when he's not at work he enjoys geocaching, martial arts, and enjoying time with his family. What he likes best about his job is helping families place memorials into a final resting place.

Tristan has been with Ohio Monuments since 2013. After graduating from the University of Toledo with a bachelors in arts, he found work in newspapers as a news writer, an on-air broadcaster in various radio stations, and fitness coaching at several Toledo YMCA locations. The most rewarding part of Tristan's job is listening to families express their ideas or stories, then translate those facts into a memorial. When he is not at work, Tristan find solace in exercising at the gym or reading novels. 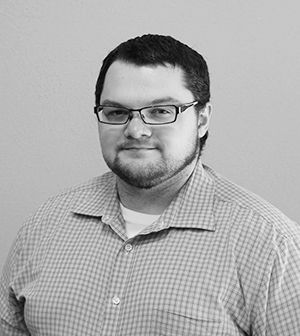 Born a simple country boy in Southern Ohio, Ryan grew up around animals and has had a love of pets his whole life. He currently has a dog named Scout, a cat named Dean, and a rabbit named Sam. He moved to Whitehouse, Ohio in high school, and went on to attend the University of Toledo where he majored in Mathematics. He started working for Design Memorial in 2017, and found the work to be more rewarding than he could've imagined. "I love meeting new people and hearing their stories. Every person who comes through our doors has a story to tell, and we get to help them capture part of that story in a memorial stone. There's something satisfying about the work we do, and the closure we can help provide families, giving them a unique and personalized way to remember their loved ones for generations to come." 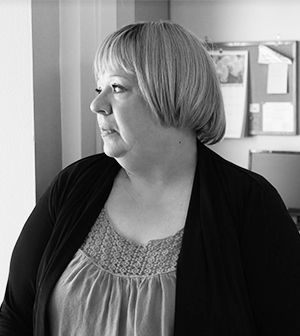 Nancy has been with the company for about 8 years. She’s a member of Holy Rosary Cathedral Church, has a very close and loving family, enjoys movies, cooking and volunteering. She’s dedicated years of volunteering to places such as at St. Vincents Hospital, St. Anthony’s Villa, the crisis hot-line for Lucas & Monroe counties and assisting the criminal bailiff in Lucas County Common Please Courthouse. Nancy works mostly with families who are planning ahead to create a memorial of how they’d like to be remembered or reaching out to families who have lost a loved one. This allows her to assist in creating a memorial stone to preserve the memory of those being honored. A tribute of their life in a beautiful during way to created an everlasting monument for the family. 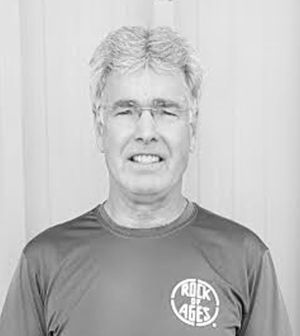 Jonathan has been with the company since 2007. He is married, has three sons, four grandchildren and attends First Alliance Church where he's active in helping with the youth and greeting families. Jonathan enjoys camping and is a member of the Maumee Valley Wheelman Bicycle Racing club, enjoys racing every week and riding his bike to work daily. He enjoys helping families by adding final inscriptions on their memorial stones as well as custom carvings and verses.